A song, a speech and some Ukulele's!

A few weeks ago, fellow speech and language therapist, Liz Panton, asked me if I would like to attend an open mic spot at Bar Loco, Newcastle to promote Giving Voice. I agreed to attend and prepared a short speech about the campaign. Liz planned to perform her Giving Voice song on her ukulele followed by a little talk from me. Liz also asked me to take my own ukulele along and the Left Hand Stairs Uke group also played the song. 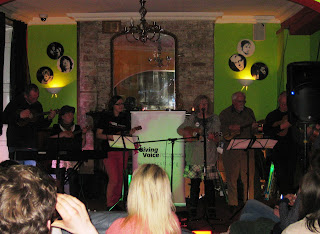 I arrived feeling slightly nervous as I hadn’t been to Bar Loco previously and my uke hadn’t been out of its case in over a year! Once Liz arrived we started setting up as we were on first. Liz introduced us and sang the song and we played along on our uke’s with her. The audience looked quite interested and I was looking forward to sharing some information about the campaign. Once Liz finished the song I spoke for a minute or two about who I am and what Giving Voice is. I planned to say more than I did, but kept it a little shorter, due to a mixture of nerves and keeping the audience interested. I told them I had leaflets and pens if anyone wanted to find out more about Giving Voice.
Liz then told people how they could find out more on twitter (#GivingVoiceUK) and also explained that Newcastle students are participating in ‘No Voice week’ this week (@DVoiced) Find out more about what they have been up to by reading their brilliant blog here!

We then played the song again this time missing out words for the audience to join in. I think everyone enjoyed it and someone asked for some leaflets after the performance. I also left a few behind after I left so we managed to spread the message a little bit further.
I think Liz had a brilliant idea in performing at an event like this as it was something interesting for the audience as well as raising awareness in a different type of situation. Well done Liz!!

Here’s the videos from the night (thanks to the man with the iPad!) My speech is in part two, but the beginning of it is missing. Enjoy!

Speech and Language Therapy Transforms Lives
﻿
Posted by Julie_GivingVoice at 16:11

Julie_GivingVoice
My name is Julie Cota and I am a Speech and Language Therapist. I have been involved in the Giving Voice campaign since 2011 :-) I am passionate about the profession and supporting people with communication difficulties reach their full potential. I'm always smiling and like to talk A LOT! :-) Thanks for checking out my blogs!